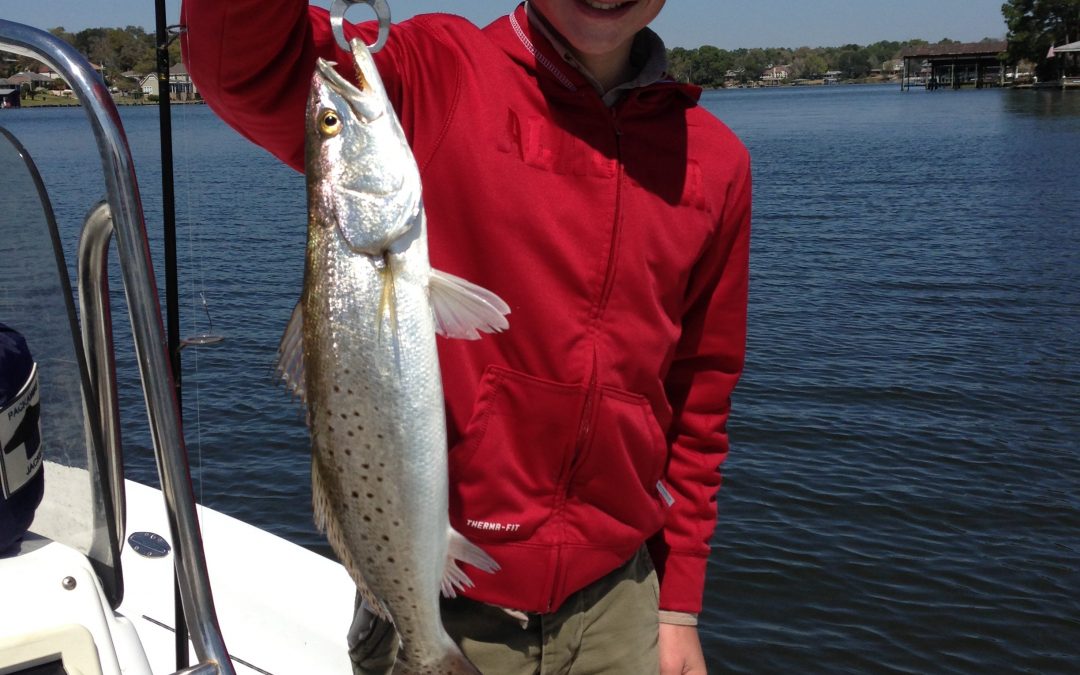 There’s a point in a spotted seatrout’s life when it reaches about 17 inches and like most teenagers, it gets an attitude. It goes from a fish that can be waterskied back to the boat on light tackle to one that will take drag.

Even more noticeable is its change in diet. From eating about 80 percent shrimp and 20 percent finfish, it does a total flipflop to 80 percent finfish and 20 percent shrimp. It’s at that point in its life that a seatrout becomes mature. The numerous dark spots across a field of purple and black start to fade to brown, as the fish leaves the safety of the dense grass and begins hunting sandy potholes, oyster bars, mangrove shorelines and sand cuts. The fish is less concerned about comfort and safety, and more oriented toward finding its next meal.

To catch a trophy-size seatrout, what can we learn from this knowledge?

1. Feed them what they want. Live pinfish, pilchards, mullet and pigfish are major sources of protein for spawning-size trout. Topwater lures, swimming plugs and soft-plastics in larger sizes can be excellent producers, particularly during bait runs like the fall and spring pushes of mullet. Shrimp—though only 20 percent of their diet—are nevertheless important, particularly during the winter and spring

2. Right-size or even up-size your lures. Match the size of the forage in the area, whether that’s a 10-inch mullet, a palmsized pinfish or a 3-inch pilchard. Trophy seatrout will eat surprisingly large baitfish, even cannibalizing members of their own species (occasionally you’ll find one floating, after choking to death on a meal!). Don’t be afraid to throw a 7- or 8-inch jerkbait, swimbait or topwater plug. Some days, the larger topwaters—such as the Heddon Super Spook, Yo-Zuri Pencil or Rapala X-Rap Walk 13—outproduce smaller baits.

3. Fish the edges. As juveniles, seatrout prefer dense mats of seagrass, where they may forage in relative security. Given that one of the greatest predators of juvenile seatrout is adult seatrout, most of the grassbed schools are made up of like-size individuals. In the dense grass, their dark backs and numerous spots help camouflage the youngsters. Larger trout lie on the sand or mud waiting for prey to move into the open. Look for them in sandy potholes, edges of sandbars and drop-offs, on oyster bars and shallow sandy bottom where mullet and other baitfish gather.

4. Methodically cover water. Seatrout are lunging/grasping predators, which means they dart short distances to grab their prey, catching them with their pronounced front teeth before turning the fish headfirst and swallowing it whole. They aren’t likely to run far for a lure—not like jacks, blues and other strafing feeders. You’ll have best luck making long, accurate casts. That holds whether you’re prospecting a likely area or delivering a lure to a fish you’ve spotted.

5. Fish sunrise and sunset. From an early age, trout learn they’re most effective at catching food in low light conditions. Adults retain that tendency. Fish when they are most actively feeding. Don’t overlook night, either, as the fish feed heavily on the edges of dock lights or in the light of the moon.