How to fish a Popper 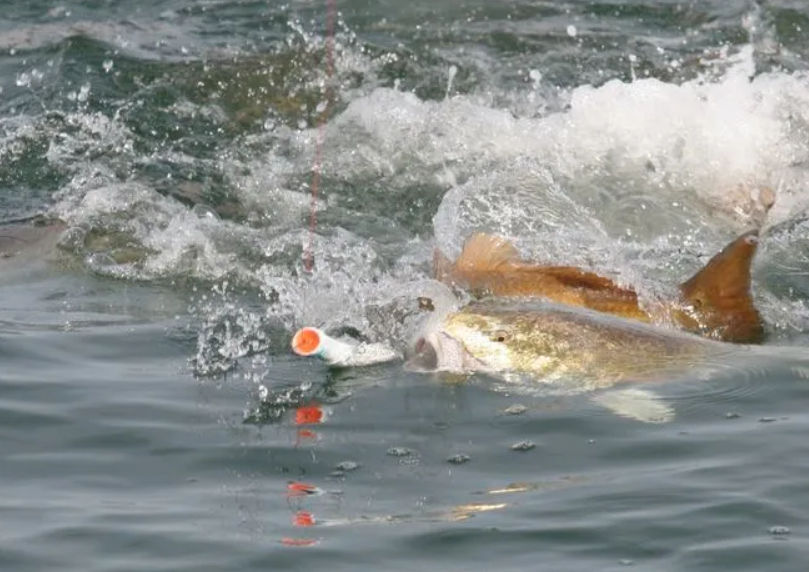 A popper is a lure that usually tapers toward its widest at the front, where it has a concave or slanted, flat face. The line tie is near the center of the face. When jerked forward in the water, the lure makes a popping sound as it throws air and water forward. Weighted, sinking poppers can be cast a little farther. Much more common, floating poppers are easier to work.

The action of a popper is imparted by the angler, with the rodtip movement, or quick stop-and-go reel cranks, or both. The width and shape of the face, and the overall size and weight of the popper, determine how much water it can throw and how much noise it makes when jerked forward. Some have internal rattles. The width of the face, compared to the total size, makes it a loud, aggressive popper or a more subtle one. Slower speed or longer pauses can produce a more subtle presentation. Fast swimming fish species may demand a rapid retrieve.

The action, noise and splash of a popper may approximate that of an injured, but still alive, baitfish or other surface-feeding fish. Gamefish drawn by the noise see the lure as something alive, injured, small enough to eat and moving away. Most strikes on a popper are explosive, which is why they are so fun to use.

Surface lures in general work best in low light, as in early, late or under dark clouds. They may work in really dingy water anytime. In rough water the noise they make is obscured in the noise of breaking waves. An important exception to the low-light rule is when fish are busting bait on the surface. When fish are competitive, they strike lures much more readily. Most seem to hit poppers with a special fury.

The common jack crevalle, like several other near-surface feeding jacks, has relatively poor night vision, but great hearing. The bigger and noisier a popper is, the more likely they are to blast it. A fast, loud retrieve is required. Even on dark nights, when they can’t see well, jacks will home in on and strike a big, noisy popper.

Tarpon can be moody. They may ignore a noisy popper, or explode all over it. Again, low light is better, but in really large groups, tarpon often get competitive. If you find small or large tarpon in very small grounds, around mangroves or up a creek, canal or river, try a more subtle popper at a slower pace first. They strike these lures best before sunrise or in shade, but may hit them in muddy backwaters any time.

It is often said that when in the mood, redfish will strike any kind of lure. Sometimes they will spook from noisy poppers, but will quietly “sip” a small, subtle popper off the surface. At other times their strikes on poppers are as explosive as any. At inlets, narrow passes or where rivers empty into the sea, a summer phenomenon occurs that causes really big redfish to take surface lures. When crabs are ready to drop their eggs, they are very sensitive to water salinity. If heavy rains flood creeks, rivers, bays and lagoons with fresh water, then crabs float out to sea, right through inlet, pass or river channels. Many big redfish await the feast. Of all available surface lures, the big poppers are heaviest and can be cast farther from banks or jetties to reach the redfish. Drifting the channel in a boat will allow shorter casts. In this case, don’t pop or retrieve the lure. Just let it float. What an exciting strike it is when a 30- to 45-pound redfish blows up on your surface lure!

Spotted seatrout prefer to hit poppers before sunrise, under dark clouds or on cool evenings, in fairly calm, rippled water. For average seatrout (under 20 inches) those poppers around three inches long are best. Even gator trout like smaller poppers, although in slightly rougher water they will strike them to 5 inches. I have personally witnessed a 33 ½-inch speckled trout being caught on a 3 ½-inch, 3⁄8-ounce popper. On moonlit nights trout will strike poppers and other surface lures well. Try this just outside the ring of light on a dock. Small trout may hit poppers even in bright daylight.

Offshore, take a big, strong, through-wired popper out there and you’ll be amazed at what may strike them! The best situation is around a surface bait ball, for any species in a feeding frenzy. At other times, dolphin, jacks, cobia, tuna, shallow grouper, any of the mackerels (including wahoo) and even sailfish may take a popper.