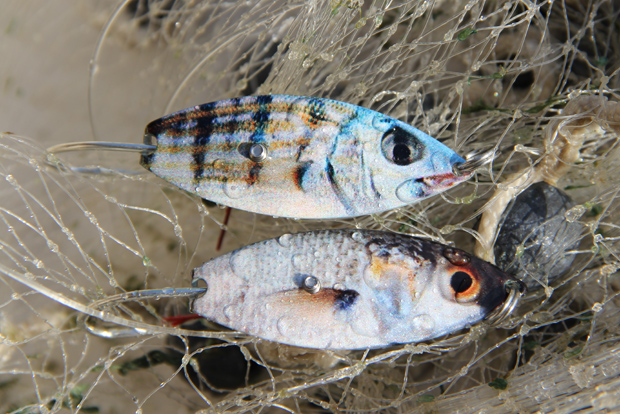 They look so real you’re tempted to throw a castnet over them. The 2013 crop of artificial lures—showcased at the ICAST show in Orlando over the summer—includes an assortment of super-realistic models that should make it dang near unfair to the gamefish they’re aimed at fooling.

Improved photo-copying, computerassisted design and advanced molding technology now make it possible to shape near-perfect imitations of the critters fish love to eat, and a number of lure-makers are taking advantage.

The big plus with these lures is that you don’t have to fish them fast to draw strikes. With lures that only vaguely resemble baitfish, unless you keep the bait moving rapidly, the fish will sometimes see that it’s bogus. That won’t likely happen with the new breed; many of these lures could be fished almost like live bait, and probably will produce almost as well.

Rapala has one of the more interesting offerings in their Balsa Extreme Minnow. It’s a high-floating balsa lure—but it’s encased in an amazingly lifelike polycarbonate shell that adds flash and realism as well as making the lure, for practical purposes, nearly indestructible. For those who have seen too many smashed balsa baits, this is the next generation; www.rapala.com.

The Jackall SK Pop-Grand is another great-looking topwater, a Japanese import that includes molded gill plates and an amazingly life-like paintjob—at a price; the lures list at $15; www.jackall-lures.com. Same company also makes the Clone-Gill, a soft plastic that pretty much looks like a mold taken off a live bluegill—great for big bass in spring when the fish are defending their nests from these panfish.

Live Target has built its company on producing amazingly life-like lures for both fresh and saltwater anglers. Their Spanish Mackerel trolling lure looks like it could jump out of the box and bite you, and I’m guessing that all those kingfish that love to eat small Spanish will not be able to tell it from the real thing. The lure weighs 17/8 ounce and dives to about 15 feet when trolled. The same company makes a topwater finger mullet that should drive big snook, trout and tarpon bonkers, and for bass anglers a bluegill that looks so real it’s likely to attract a mate in the spawning season; www.livetargetlures.com

Sebile’s Flatt Shad is another notable imitation—a great likeness of a menhaden in saltwater or a gizzard shad in fresh. It’s a vibrating crankbait, and it’s available in a weedless version with aft-facing double hooks that should be highly useful for bass anglers fishing around hydrilla and eelgrass; www.sebile.com.

Heddon’s Swim ‘n Image is a realisticlooking shad/sardine imitation, with a small lip that allows it to be fished as either a crankbait or a jerkbait. You might also like Berkley’s Flicker Shad, which is a deep diver that would be good for bass in mid summer, or for reds on the edges of the ICW year around; www.berkleyfishing.com.

There are lots of great-looking frog baits, as well; the Booyah Pad Crasher is one where the body looks absolutely edible; www.lurenet.com. If you have a whole lot of confidence in your line, you might try the Moreau Bri-Frog, which pretty much looks as if some wise-guy taxidermist stuffed a weird little frog and puts hooks in it—but it sells for $28! Check www.moreaubaits.com for more.

Spoons are getting the photorealistic treatment, as well. Florida inventor and fishing guide Capt. Mike Hakala introduced a Live Bait series in his Aqua Dream spoon lineup. Pinfish and mullet patterns, key prey items in Hakala’s Mosquito Lagoon and other Florida waters, are available in ¼- and 3⁄8-ounce models in weedless and treble hook versions. Suggested retail price is $6.99; www.aquadreamliving.com.

Soft plastics, like the D.O.A. Shrimp, have long been available in ultra-realistic patterns.

Of course, some of the very best “real thing” imitations have been around a few years—the D.O.A. Shrimp often outfishes live shrimp, especially when there are bait-stealing pinfish around.In short, this is the year to “get real”: your fishing success in fresh water or salt is likely to improve.