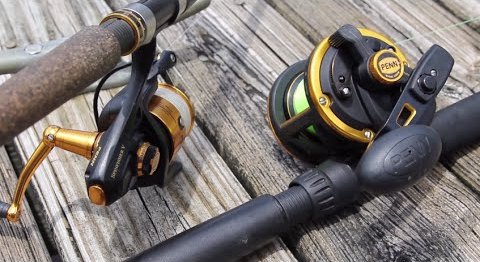 For some types of fishing the choice of whether to use a spinning or conventional reel is an easy question to answer, however, in other instances the choice may weigh much more heavily on the strong and weak points of each type of reel as well as personal opinion. When it comes to casting reels, picking the right reel for the job is a big decision. Being able to cast far, accurately, avoid wind knots, and have plenty of drag stopping power are all things to take into consideration.

With advancements in drag systems and braided fishing lines, spinning reels now pack more drag power and line capacity than ever before. With ease of use and the ability to avoid the backlash associated with conventional reels, the spinning reel seems like the perfect choice. However, there are some strong arguing points for using conventional reels for casting. Conventional reels are lighter in many instances and when paired with the right lure they can cast much farther than a spinning reel. Also, they are built with less moving parts, which means less chance of failure when fighting a big fish.